Signals Branch has recently designed and tested a new signal base for the range of locally produced brass lost wax cast NSWGR Signals that allows the mounting of a small linear servo. 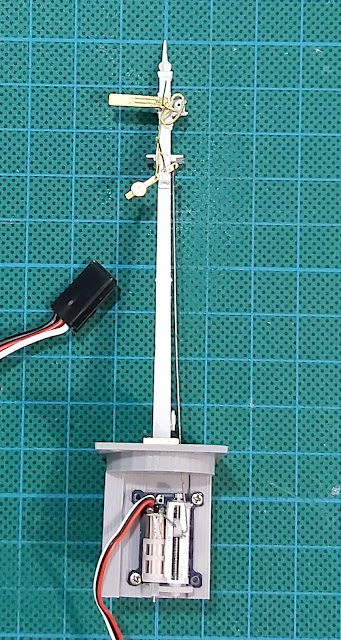 An order for the Signals Branch locally made lost wax cast brass signals with this new linear servo base or the original screw adjustable signal arm throw base/mechanism either as a kit or built can be made by email to: rpilgrim@bigpond.net.au

The signal base will mount into a 22 mm diameter hole in the layout baseboard.

A double mount has also been designed and tested successfully for two-arm signals such as brackets.

Although not designed and tested as yet a three-arm signal base should be possible but will require more below baseboard vertical clearance.

The servos will need to be driven by a servo driver board such as those supplied by Tam Valley and other companies. I believe that Arduino boards can be used but that is outside my area of knowledge.

The linear servo is fitted with a plug that matches the Tam Valley servo driver boards.

The linear servo can be sourced online with a different plug for those not using the Tam Valley servo driver boards.

Signals Branch has no affiliation with Tam Valley just a user of their products.

The advantage of these 'built-in' linear servos is that there would be no need to get under the layout to install them with all signal arm throw programming being able to be done on the workbench.

Unfortunately, these linear servos are not cheap like the 9G servos.

At this stage, the linear servos will not be available separately.

I currently have approximately 20 linear servos available for inclusion in kits or built signals with another 20 in transit but not expected for several weeks.