A range of brass NSWGR Signals in both timber post and steel round post versions has been commenced. The first releases are 23 foot single arm signals in timber and round steel posts.

The assembly instructions are available for download from the Links on the right hand side of this page.
A White Strong and Flexible Signal Base/Mechanism is also required to mount these signals.

Also required is a ladder, either a Signals Branch signal ladder or an etched brass ladder from another supplier.
The assembly instructions are available for download from the Links on the right hand side of this page.

Just a short post to announce that I have recently made some 4 bolt and 6 bolt fishplates and sleeper plates available on my Signals Branch Shapeways Shop in the HO Infrastructure range and the 7mm Scale range. All of the items are printed in the Frosted Ultra Detail acrylic material.


These items were designed as a result of a request from a modeller so if you have an idea contact me and I will see what can be done.

My email address is rpilgrim@bigpond.net.au


The fishplates were designed for Code 70 and 75 rail but would also work with Code 100 rail.

The fishplates can be glued to the sides of the existing rail to add that missing detail, not for the modern image welded rail modellers though.


Of course the sleeper plates with the holes can also be used as scenic detail laying around the railway yard and alongside the line.

I have also done the fishplates just with holes for lineside details as well.

Here are some 3D renders, photos of the prototypes and a couple of HO 3D model prints.

Just a short post to announce that I have recently made some left and right hand offset bracket signals available on my Signals Branch Shapeways Shop in the HO Fine Detail range and the 7mm Scale WSF range.

Here are some 3D renders of the signals showing the detail level. Note that these are views of the 7mm Scale signals as they show the operating mechanism below the signal base, however the HO Fine Detail Signals have the same level of detail (basically the same 3D file) but without the mechanism which needs to be ordered separately as it is in WSF to reduce the cost.

I would like to point out that these signals have two signal arms, a 39 inch and a 30 inch to allow the modeller to choose which one to use.

I have also added a left hand offset bracket to the White Strong and Flexible (WSF) original HO signal range but of course the range doesn't have the higher level of detail.

The following renders of the 3D file for the left hand bracket shows the detail I have managed to achieve. I am particularly proud of the results. 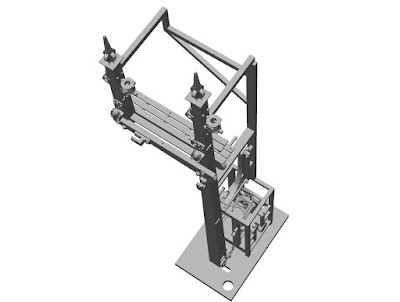 The same 3D design is used for both the HO and 7mm Scale signals, adjusted slightly and re-scaled.

The signal comes with one 39" and one 30" signal arm for a main line and a loop. I will be making a range of signal arms available if different sizes/types are required.

The supporting struts attached to the post and bracket are to be removed of course, they are there to protect and support the bracket during the printing process.

The 7mm Scale signal has the appropriate mechanism as part of the print as the signal is done in WSF.

Ladders will be required and printed ladders for each scale are available.

From the above list it will be seen that I now have a sprue of 10 HO ladders printed in Frosted Ultra Detail acrylic material and these come with the cast iron signal ladder base as part of the ladder.

Apart from use with the HO Fine Detail Signals, these ladders were also designed to replace the coarser ladder of the original basic White Strong and Flexible signals if the modeller so desires or for use on other suppliers signals.

Here are a several new items I have recently made available in my Signals Branch shop.

7mm Scale Clearance Posts with Lamps added to the Range

7mm Scale Clearance posts with Lamps printed in Frosted Ultra Detail acrylic material have now been added to the range. These clearance posts with lamps are to be mounted in a 6mm hole drilled through the baseboard at the clearance location of a set of points (turnouts). On the NSWGR the post and lamp were painted white, paint the lens silver or leave the lens clear if you wish to light the lamp with a LED. The posts are printed in the Frosted Ultra Detail (FUD) material that can be made to transmit the light from a 3mm golden white LED placed into the 3mm mounting hole from below the baseboard by coating the lamp lens and the inside of the LED mounting with clear gloss lacquer or ACC Super Glue. Applying the clear removes the frosted look as internally the FUD is clear. If knocked hard the post may break, if so then just pull them out and replace with a new one. If there is a whiteish effect on the surface then carefully scrape this away as much as possible, this is remanent printing support material. I have no control over the orientation of the print and hence the support material. 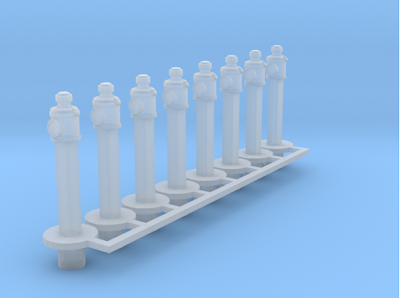 Also available are NSWGR Catch Point Indicators in both HO and 7mm Scale and both sizes can be made to work from the catch points mentioned above.

A link to my Signals Branch Shapeways Shop can be found in the links section towards the top and to the right.

Today began the introduction of a 7mm Scale range of signals with 27ft, 23ft, 18ft and 16ft single arm signals in White Strong and Flexible becoming available. The signal arm and detail parts are all in the same print, however like the HO Fine Detail signals the ladder and handrails are to be sourced by the purchaser so that a much finer signal will result. Etched brass ladder kits are available from Keiran Ryan Models and possibly other sources. As I increase the range of the HO Fine Detail signals I will also add the 7mm Scale versions.

I have added a range of Fine Detail HO signals with 27ft, 23ft, 18ft and 16ft single arm signals in Frosted Ultra Detail (FUD). The signal arm and detail parts are all on the same print, I did this to see if I could come up with a higher quality signal but also to try to keep the price as low as possible by eliminating the US$5 base charge from Shapeways for FUD. I achieved this by producing the signal in FUD for detail and the mechanism in the White Strong and Flexible (WSF) like the standard signals available from my Shapeways shop. I made a shorter mechanism to use less WSF material and a smaller machine space as Shapeways uses both of these parameters when calculating the WSF print cost. This has allowed me to make a Fine Detail Signal available for only about AU$11 more than the standard White Strong and Flexible signals.The signal is amazingly strong although it may break if given a quite hard knock when mounted into the baseboard. It is very difficult to break a piece of 2mm square FUD sprue with the fingers, well I can't actually.

However to achieve a finer detailed signal the ladder and handrails were not printed and are to be sourced by the purchaser. Etched brass ladder kits are available from Keiran Ryan Models and possibly other sources.


HO and 7mm NSWGR A Frames added to the Range

I have added HO and 7mm NSWGR A Frames to the range available from my Signals Branch Shapeways Shop. A frames are the stands that support and guide the point rodding from a lever frame to one or more points. They are available in Frosted Ultra Detail in sets of 20 frames from one frame to eight frames wide. The A frames have been designed to use polystyrene point rodding that is 0.5mm square Evergreen shapes for HO and 1.0mm square Evergreen shapes for 7mm Scale. The 1.0mm rodding is a smooth fit however the 0.5mm is a neater fit.

Click on the link on the right hand side to download a PDF file with information about which Signal Arms and Details Sets to use with particular Signal Posts. This information relates to the White Strong and Flexible signals. The HO Fine Detail signals printed in Frosted Ultra Detail come with the arm(s) and details attached to save the base US$5 production charge for the detail parts, that is it is only applied to the single print, a saving to you. Similarly the 7mm Scale signals printed in White Strong and Flexible some with the arm(s) and details attached. Other HO and 7mm Scale signal arms will be available separately.

This entry was edited/corrected on 29 February 2016.


Do You Want Someone to Build my Signals?

If buying signals from my Signals Branch Shapeways Shop and you would like someone to paint and assemble the signals then Dale Richards has indicated that he will assemble them, for a price of course.

Dale also makes his own signals using brass etches and tubing for round posts so he would be glad to speak to you regarding these as well.


Shapeways Shops Can Now Show the Price in Your Currency

Recently Shapeways made a change to the way that the price is shown.

Previously the prices on the Signals Branch Shop were shown in US Dollars but the price can now be shown in the currency of the country that you come from so Australians can see the price in Australian Dollars.

To see the Australian Dollar price scroll to the bottom of the screen and change the drop down list from US$ to AU$. I am not sure if the country drop down effects anything but you can change it to Australia as well.

Shapeways still operates in US$ behind the scenes so the price is set in US$. A by product of this is that the exchange rate causes the price to look odd.